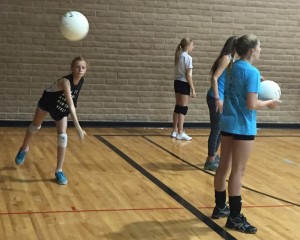 Santa Cruz mom Yarka Micka knew her daughter was going to be tall, but that isn’t the only reason she enrolled her in the Downtown Clubhouse’s popular new class, girls volleyball. Drawing more than 40 players, the special class launched on April 11 and ends May 18.

“This is her first time playing,” Yarka said of her daughter, Cera, 11, who attends Westlake Elementary School and has been coming to Boys & Girls Clubs of Santa Cruz County since she was 6. “It’s a team sport, great exercise, great fellowship, and the girls are working together.”

Athletic Director Bryon Windsor added the special class because volleyball is a popular sport at the beach and at local schools. Participants hone their skills during practice periods and games led by volunteer Morgan Ehritt, the interim head volleyball coach at UC Santa Cruz.

“What we will learn over time is teamwork,” said Morgan, who attended a Boys & Girls Club in her native Santa Barbara before coming to UC Santa Cruz as a student. “You work, you’re having fun and you’re active.”

“Our season just ended at school and I wanted to keep going with volleyball,” Tyne said. “It’s pretty cool. I just want to improve my skills.”

Check out our roster of other special interest classes.